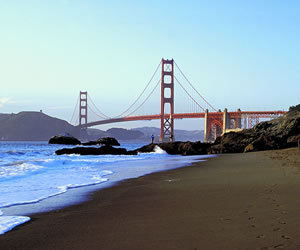 San Francisco is chock full of treats!  Bring your walking shoes, many of the places to see are walkable and accessible by bus or the famous Powell Street Cable Car.

Let’s start with a walk through Chinatown.   Its an experience as close to actually being in Asia as you can possibly get without a passport.  Roaming through the food markets you’ll find an assortment of grocers selling unusual vegetable varieties, herbs and seafood among other traditional Chinese staples like seaweed and noodle restaurants.  Take a quick pit stop at the Golden Gate Fortune Cookie Factory and have your own custom-made fortune cookies assembled before your eyes!  More than 80,000 people live in San Francisco’s Chinatown.   The core of the area is located in Portsmouth Square where you’ll still find Chinese elders playing traditional Chinese tile games.

Stroll to the waterfront, where Fisherman’s Wharf is one of the world’s most famous tourist attractions.  Sure, it’s shamelessly commercial nowadays; beckoning openly for tourists to dish out the dough, but you really can’t beat the charm of watching families of sea lions swim playfully and cuddle affectionately along the docks.   Fishermen used to dock their boats here; hence its nickname, but today it’s less of a dock and more of a shopping and dining mecca.  The wharf stretches from Ghiradelli Square to Pier 39.  Ghiradelli’s chocolate factory is now a 3-level shopping mall but you can still indulge in a chocoholic’s dream sundae or soda fountain.

From Fisherman’s Wharf you can see spooky Alcatraz Island.   Al Capone, Machine Gun Kelly and the “Birdman of Alcatraz” all occupied jail cells inside the haunting prison during its civilian penitentiary years between 1934 and 1963.  First built up for military use, then converted into a military prison and later a civilian prison, Alcatraz housed some of our nation’s most notorious criminals.  The government shut it down in 1963 after after an escape where no bodies were ever recovered.  You can learn about this mystery and experience the eeriness of the island for yourself through a guided tour of “the rock” surrounded on all sides by steep cliffs and threatening tides.   The US government turned the federal facility over to the National Park Service in 1972 where it is now a very popular attraction because of the rumored atrocities and horror that happened during its civilian prison years.   Tickets sell out fast so buy in advance.  Ferries depart every half hour to and from the island.

The Golden Gate Bridge is hailed as the most beautiful and most photographed bridge in the world.  Not only is it a work of art, but the feat to build it in spite of San Francisco Bay’s unfriendly weather and water conditions is noteworthy.  You can take a drive across the 1.75 mile-long bridge to admire the tall cables and two, orange towers from the artery inside the bridge itself.

These are only a sampling of parks, museums, tours, landmarks and fine dining you will discover upon your visit to San Francisco.  It is a charming, bustling city with a progressive attitude but hometown hospitality.   It is for this reason and many more that tourists “leave their hearts” in San Fran!

The Worldmark San Francisco resort provides a fabulous central city location to tackle all the unique activities that only a big city can provide.   You’ll hardly be in your room at all! Built in 1908, the historic building occupied by our hotel is located right on the corner of Bush and Stockton St.  Our clients rave about its “perfect location”.  Union Square and Chinatown are one block away!

*Worldmark only owns a few rooms at the Worldmark San Francisco resort. Make sure to book 13 months in advance to secure a room.  Also, because of its urban location, parking is not available.